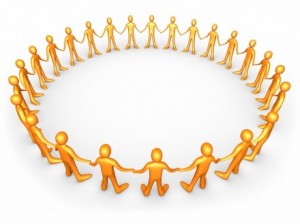 Yesterday, I got a note from Facebook.  “You’ve been away,” they said, “and we’ve missed you.  Your friends have missed you.  Please come back!”  Well, it wasn’t quite as gushing, but that was the gist of it.  I’ve been away because I finally deleted my facebook page, and so it was a little bit of a surprise to hear from them.

I left for a number of reasons.  First, I really didn’t want to know as much about so many “loose acquaintances” as I was being exposed to.  It was a little, well, familiar.  Second, I was becoming less aware of who was following me.  Third, it became increasingly difficult to moderate my communications, knowing that relatives, friends, old friends, not friends anymore, work colleagues, former work colleagues, and Goodness knows who else was listening in.  I know I had a list, but there were well over a hundred people and growing.  I can compare it to this.  If you’re speaking to family and friends, then you’re comfortable, and even with work colleagues who you know, and so on.  But if you’re giving a speech at a wedding – to, mostly, family, friends and so on, you moderate your language.  So that became uncomfortable.

Naturally, these being brazen thoughts, it is inappropriate to relay the dull and largely uninteresting detritus of one man’s meagre existence without extrapolating wildly and superimposing some thought provoking generalization that must naturally flow from it (or them, depending on whether “detritus”, the subject, is singular, which I think it is, or plural, which it looks like it might be).  So wandering off down the path of deluded folly, perhaps there is a limit to what Facebook can achieve.  Just as the Internet democratizes, as communications globalize, and as widespread cheap travel homogenizes the peoples of the world, maybe Facebook’s efforts to remove location and proximity from social interaction can only go so far…that the extent to which true interaction can be “broadcast” is limited..and that people can really only have so many friends, beyond which it becomes a kind of of X Factor for the Personal Niche….that group of people who are not friends, or not just family, or not just colleagues, but that group of people that you want to influence, impress or please.  And instead of getting voted off, one decides at some point in the game to retreat into self-imposed exile to rest, away from the bright lights, and slip back into blissful, relative obscurity.

And maybe, just maybe, as Bebo slips into the clutches of a venture capitalist for a rumoured $10m only two years after being acquired by AOL for $850m, and numbers fall off MySpace as its clutter and sparkle seems so very 2008, Facebook is reaching its own crescendo.  Question is, what next?  And will it be on our mobile phones first?

4 thoughts on “Ghost in the Machine”