An odd thing happened to me over the weekend. I received my first ever letter from Dar Es Salaam, postmarked 12 November 2010. 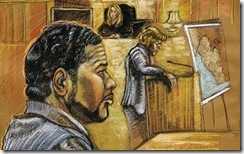 It was from Charles Taylor Jnr. the infamous son of the former dictator of Liberia, Charles Taylor. It promised me 30% of $177,000,000 or a shade over $50 million dollars, and all I have to do is fax my contact details to a number in London to get the ball rolling.

A few things just jumped out at me. I was amazed that someone would waste an 800 Tanzanian shilling stamp (about 50¢) to send me SPAM. I had thought that SPAM was limited to email given the cost of paper and stamps. The letter was sent from Tanzania which last time I looked was on the other side of Africa and about 4,650 miles (7,500 kilometers) from London. I also wondered what made the spammers pick me out of the 350 million people in the US, at least they just had my old address (we moved about four months ago). A scan of the letter itself is appended below.

I guess the absolute giveaway was the mention of a meeting on the 19th of November, 2009 in London attended by Charles Taylor Jnr. Trouble is you can’t be in two places at once and at that time he was well into his first year of a 97 year prison sentence, for torture and summary executions in Liberia, in a US prison. [link]. I think I will have to make my first $50 million some other way. 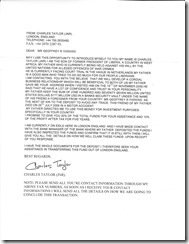