Perhaps a little far from mobile coups d’etat, but the Irish Sovereign Debt Crisis has been nothing short of brazen – and then some.  The divertissements of this contributor have been consumed with bond yields, contagion, strategic default, the extent of European political union, and the rights and the wrongs of it all.  So it’s hard to think about mobile phones and all that stuff; it’s nigh impossible to read about anything else in this country right now, notwithstanding the omnipresent Internet.

So for our foreign friends out there, I thought I’d paint a picture of where we are, and where we have come from.  Ireland began to boom in the late 1990s.  Things were looking up, the Global economy was doing well, and as the boom got boomier, to quote our grammatically challenged former leader, our GDP grew and grew, and the tax take grew.  Most was driven by foreign direct investment in the early to late 1990′s, but post-September 11th, as the world economy stalled and wondered what it should do next, the Government of the day decided that in order to maintain growth in the economy, it should incentivise economic activity domestically, particularly in the property market.

So tax breaks were introduced for developers.  Special schemes to develop depressed areas such as former seaside “resorts” (this author’s home town included) allowed wealthy people to buy apartments and write off their investment against their taxes for ten years.  A whole raft of incentives were introduced, and the tall cranes began to sprout up everywhere.  Concurrently, buyer reliefs such as mortgage interest tax relief compounded the situation – for both investment and primary properties – and prices to rise.  Builders could not build houses fast enough.  There were queues of people to buy houses that had not already been built yet, ready to lodge massive deposits (borrowed, of course) in case they may get “gazumped“, that wonderful phrase that now seems so quaint looking back, where a builder would take an order, and between that point and the order being contracted, the builder decides to go for another twenty grand.  This was clear profiteering, and usually the people stumped up the cash.  If they had it.

Anglo went first, then the other banks followed.

Meanwhile, the banks were throwing money out the door.  Anglo Irish Banks loaned inordinate amounts of money to the developers to build the houses.  Their return included not merely the coupon, but in some cases a share in the profits from the development.  They aggressively pimped development opportunities.  They went looking for land, for zoning decisions, and then presented the deal to one of their developer customers in order that they would take the loan.  Anglo grew at 10, 20, 30% year on year in the early years of the bubble, extending massive, massive loans – and securing capital from banks in Germany, France and Britain in order to do so.

Meanwhile, Allied Irish Bank (AIB) and Bank of Ireland (BOI) were in trouble.  Their upstart neighbour was causing no end of difficulties for them, showing them up.  But AIB and BOI were prudent, they were not lending too much, not taking on too much risk.  Anglo would get found out, they suggested, but its narrow base and intolerable risk profile.  Trouble was, they didn’t.  They kept growing and growing, and as pressure from the top built to counter the lack of participation in this boom, BOI and AIB eventually started to mirror Anglo dealings.  Two smaller banks, EBS and Irish Life & Permanent did the same. 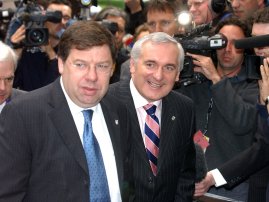 In 2006, things began to stall a little.  Property prices did not go up as much as they had done.  As 2007 approached, all the talk was of “a soft landing“.  As things got worse, and commentators like Morgan Kelly began to predict a serious bust on the way, Irish Taoiseach (prime minister) Bertie Ahern suggested that those talking down the economy should go off and commit suicide.  He got more stick from the suicide prevention lobby than from the economists for that remark, but it has lingered in the air since, like a bad smell.  Shortly before that speech, he had almost led his Fianna Fáil party to an overall majority in Dáil Eireann, the national parliament, despite people’s misgivings about the economy, and about him personally – he had been under investigation by a tribunal of inquiry for unexplained transactions in his bank accounts.  Amongst the gems in his evidence it emerged that for a four year period when he was Minister for Finance in the late 1980s and early 1990s, he did not have a bank account.  He used to keep all his money in cash.  As the inquiry began to uncover more and more incredulous things, one explanation for a bunch of money was that he had won it gambling on the horses.  In March 2008 he announced his resignation as Taoiseach, and was succeeded by Brian Cowen.

It is generally accepted now that Fianna Fáil won that election because people were afraid of what was coming, that the world economy was beginning to falter.  The first flurries of the subprime mortgage crisis in the US had given markets the jitters, and while most people didn’t particularly have great confidence in Fianna Fáil, they were afraid to rock the boat.  In 2008, things got progressively worse.  Northern Rock bank was nationalised in the UK.  Bear Stearns failed in the US.  Lehman Brothers went to the wall.  In the mean time, Irish bank shares were under massive pressure, falling precipitously since mid-2007 (see charts).

On the night of September 29th 2008, the Government issued a blanket guarantee worth €440bn (at a time when GDP was approximately €50bn) of all the banks.  There was a huge crisis emerging in Europe.  Banks were shorn of their previous strength, and politicians and regulators were floundering looking for an answer.  Initially, it appeared as though Ireland had been clever., stealing a march on its neighbours.  Capital began to flow into Irish banks from neighbouring Britain and other states.  But shortly thereafter the British authorities issued their own guarantee, and similar structures were established in other markets to regulate the capital flows once more.  The immediate crisis had passed.  The question now was what exactly the government had signed up for.

The immediate problem was a capital deficit in Anglo Irish Bank.  Developers were finding it difficult to sell property in what was then being seen as a significant correction in the property market.  As a result, they were having difficulty repaying the exorbitant loans extended to them by Anglo in particular, but also the others.  AIB and BOI had significant deposits with Anglo (although the National Treasury, curiously, did not, because they didn’t like the model) and therefore if Anglo failed, it was likely that the others – and therefore the Irish Banking system – would fail.  While there was a lot of money that was now at risk, the government at the time was taking the view that it was not anything near the scale it has since turned out to be, perhaps something in the order of 4-5bn.  But in the absence of facts, they simply guaranteed everything.

Once the guarantee had averted the immediate crisis, the banks then needed to continue to trade.  Pressure was unrelenting on developers, who were increasingly in default.  The reputational damage to the banks at that stage was severe.  The bond markets were unimpressed, and it was increasingly difficult, and expensive, for the banks to secure finance to operate.  The ECB became the prime lender, and as the stock market followed the bond market, bank shares continued to plummet.  Anglo needed more capital, and then some more.  In early 2009, Anglo Irish Bank was nationalised.  Throughout 2009, more and more money was ploughed into the banks as the economy slid into recession.  As investigations were conducted into the loan books of each bank, NAMA (National Asset Management Agency), a bad bank set up to buy bad loans, discounted the value of loans by 50%, 60%, 70% in some cases.  Soon, it became clear that there was very little left of the banks that represented “real” banking.  An austerity budget was passed in December 2008.  An emergency budget passed in June of 2009.  Another round of austerity measures were introduced in December 2009.

In 2010, the condition deteriorated further.  With each capital injection the state made in the banks, its own debt position was increasingly coming under pressure.  The bond markets for sovereign debt were beginning to take a dim view of the level of exposure the state had to the banks – but the State had no choice, having issued the blanket guarantee.  Bond tields began to increase, and in September 2010 the National Treasury Management Agency (NTMA) announced it was pulling out of the bond markets, as the price had become too high (in or around 6%).  At that point, it became inevitable that outside assistance would be inevitable.  And last night, November 28th 2010, the EU, IMF, and a number of European countries in a bilateral move, established a €67.5bn package for Ireland, along with €17.5bn from state coffers (liquid assets, plus resources from the National Pension Reserve Fund).  In return, we are expecting a further austerity budget in December, and several more over the next few years.

The Irish condition was many things – a bank crisis, a property bubble, a bond market “sentiment” issue (and cautionary tale), and a currency issue.  The text books of future economics students will be filled by examples from Ireland, and Iceland, and indeed the Euro.  Generally speaking, these will be under the “what not to do” section.  And now?  The banks are zombies, all of which are substantially if not yet entirely owned by the government.  There is no longer any separation between the state and the banking sector; there is no banking sector, effectively.  Well, emigration has returned, which is a shame.  Unemployment is running higher than in Iceland.  The Fianna Fáil party, facing into an election in the early part of 2011, faces decimation.

On the bright side, Ireland retains a strong underlying economy, driven by foreign direct investment.  Large multinationals employ tens of thousands of Irish men and women.  The state sector is contracting, but critical services such as health care and education remain.  Much of the fat is being cleaned off, and while a contraction of this size will inevitably lead to a reduction in the level of services, the great bulk of services remain.  Ireland will rise again from this terrible period in its history.  I just hope that we can learn from it, and make the changes required such that it doesn’t happen again.

One thought on “The Irish Condition”