In a wonderful case of mistaken identity a young American woman, Ashley Kerekes, while minding her own business, has become 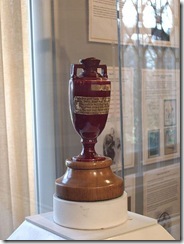 a darling of the cricket world. Known affectionately by her family and friends as Ashes, she chose the Twitter handle of theashes . Now as anyone who has ever been exposed to cricket knows, The Ashes also refers to  the international series of Test matches, played between Australia and England dating back to 1882 and is probably one of the most celebrated international rivalries in any sport.

It seems that quite a few Twitterers (people who tweet) made the assumption that someone with the handle of theashes must be associated with the game of cricket. The good thing though is what started out as an annoyance turned out to have a silver lining for Ashley as she was whisked off to Australia to see the final test.[BBC article]. If you have the time, listen to the wonderfully British BBC announcer interview Ashley, it is delightful.

One thought on “It is all in the name”