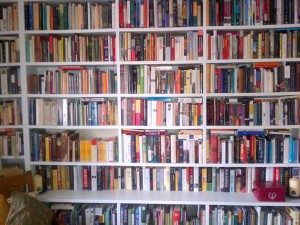 The New York Times reports on falling Spring viewership for TV just as we approach what they call in the biz the “upfronts”, or the ad buying season.  Fox is down 20%, ABC 21%, CBS 8% and NBC 3%, all of which are quite savage.  One of the interesting things is the list of excuses as to why this is happening.  A substantial amount of the blame goes on the abandonment of linear viewing, that PVRs have allowed people to choose when they watch a show (skipping ads, of course).  Delayed viewing according to one exec would be the second biggest show on TV if it were ranked that way.  The decline of American Idol too has impacted, which is of course a live show, and therefore not as susceptible to the nonlinear thing.  They blame the quality of some of the shows…and they even blame the weather!  Bless!

None of them mention channel offset, which has to be one of the most significant factors.  I mean, there’s a simple question – if people are not watching TV, what are they doing?  How are they being diverted or entertained?  Why do none of them want to acknowledge that?  Maybe it’s because it’s such a pervasive trend (the shift from TV to internet, peer to peer and non broadcast media) now that it goes without saying…but I thought it was odd no one mentioned it.  Maybe – and here’s a wild thought – maybe people are reading books again? Ah, sure we can only dream!