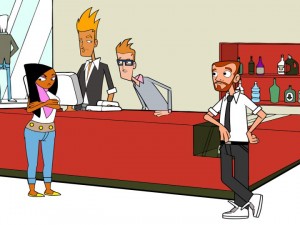 Meanwhile, the entire retail industry is digitizing.  Just as IBM (who, in the interests of full disclosure, pay the wages of your correspondent) is talking about the increased importance of the CMO, Forrester have come out with some new research about how eBusiness is moving to the c-Suite.  Apple has revolutionised the mobile phone business, the telco business, the consumer electronics business, and – crucially – the retail business.  Everyone is racing to catch up, and while the traditional retailers have been lumbering into the online world ten or more years since mainstream internet adoption became real, suddenly they are being overtaken once again by an integrated digital mobile ecosystem that is further eroding retail conventions.  So different retailers have done different things.  Tesco and Walmart developed the online channel but both continue to struggle in a world that moves too fast for their scale; Best Buy still writhes in anguish; and Borders went bust.  Quoting from Peter Sheldon over at Forrester, “In tomorrow’s  Wi-fi connected, digitally enabled store, fixed checkout aisles and cash registers will fade away; instead the entire floor becomes the point of sale.”

Let’s think about that for a minute as we wander back to the world of telco, and the enormous high street presence that the industry controls.  Forget about the multi-channel issues (one telco guy told me recently that they have a multi-channel program called One Channel – that says it all, really!) and the integration problems and the inside out versus outside in, and think – think hard – about the importance of the retail store.  Channel integration tends to think of the online presence as the crucial part to get right – everything else connects to that.  The call center, the retail store, the self serve functions, everything connected to the central online hub, because there’s an elegance to it.  To a degree, that’s OK.  But it’s probably the easiest channel to do, because it’s so new, so underutilized, and so clearly fit for the audience that are being targeted.  So a channel strategy that centralizes on the online channel starts with the easiest bit and hopes that that will accelerate transformation in the other channels.

Most money (from a channels perspective) remains invested in the retail stores.  The rent alone for the high street presence is likely to dwarf the budget for online.  Why is that?  Well, partially because retail is seen as such a significant component of the brand, and in an increasingly commoditizing world of telecommunications, the value of the brand becomes almost more valuable than the network, which is less and less important as a differentiator.  The processes in retail are vastly different to the other channels because of the physical interactions that are necessary to support.  That in turn makes the infrastructure requirements very different, and the extent to which retail stores can leverage a centralised online repository of functions is limited by the physicality of the interactions.  The involvement and interactivity of the consumer themselves – physically picking up a mobile phone, or a leaflet (if there are any left), the non verbal communications, the unintegrated action – makes them far more difficult to serve.  That is the challenge.  If telcos can perfect the retail store experience, and port that to other channels, then perhaps there will be a genuine channel transformation.

Just think about the integrated, personalised digitally immersive experience that could be possible in a truly connected store.  The analytics and business intelligence that guide customers and attendants through the store; that advise on the buying cycles; that make the environment useful, desirable, and attractive for consumers; that make minimum wage clerks intelligent and engaging, both for the telco that employs them and for the consumer that has to interact with them (perhaps).  When the consumer walks into the store – and even before the consumer walks into the store – their lives are immediately improved by the experience, as they are enveloped in the warm glow of personal care and attention, and they are engaged by a partner (yes, a partner) who understands them, like a personal android (zero Google reference intended) that they own, a partner who wants to genuinely help them to be as satisfied as they can be.  Once that kind of experience becomes possible, the relationship with the customer and the channel become inseparable.

Sound powerful?  It should.  Apple aren’t there yet, but they’re working on it.  And if a telco could make it happen, it becomes the platform upon which all kinds of new businesses can be built.  Think about the retail stores as an infrastructure for a new kind of social network.  Rather than people being nodes on the social network, the stores are the nodes, and people move between the nodes.  What are the features and functions in each node?  What free stuff can customers engage in while they are there?  Do telco retail stores become cool places to hang out?

All of this is eminently possible today, but there’s no small investment required, but there are cheaper things.  Simple things like pushing analytics to the stores (next best action, offers, recommendations, sales analytics, and so on), recognizing and registering store visitors, market research to understand why stores are useful, staffing right, managing inventory, and extending the product and service range to maximise the usefulness of the retail store network can all lead to a better experience.  Check your bill in store, integrate your in store experience with your mobile device, free wifi for customers in store (why this isn’t already standard I’ll never know) can all make the experience better immediately, with minimal cost.

It’s not just for the telecommunications industry, of course.  Connected consumers everywhere are increasingly expecting connected services.  Telcos could do more than anyone to lead the way – leading: now there’s a novel idea!