It has been a while since I put pen to paper (keyboard to blog) but after too long a hiatus, here we go.

I have long been a big fan of “Connections” both the book by James Burke as well as the PBS series. His underlying premise “however carefully you plan for the future, someone else’s actions will inevitably modify the way your plans turn out.”or the way I like to think about it “sometimes things come together in unanticipated ways” is used to understand the forces behind major technological, scientific and cultural shifts. 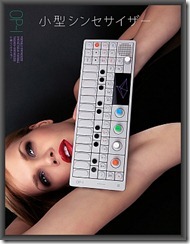 So a few months ago, my son of the band Superhumanoids  started using this amazing new  portable synthesizer, which is made by the Swedish firm Teenage Engineering. This thing really is a technological marvel in a very small package.

About a year or so ago, I wrote about the real 3D revolution and how additive manufacturing was going to change manufacturing as we know it. So imagine, my surprise when I read on the Wired blog that Teenage Engineering, were no longer going to sell spare parts (knobs etc.) but going to allow their customers or third parties to make their own by providing the software code to drive a 3D printer. It was just too expensive to ship single items from Sweden to musicians around the world. As the Wired post concludes:

Teenage Engineering’s intriguing move points to a near future where you can jam on your synth, fire up your 3-D printer, build an accessory, and snap it onto the device within hours. If the pattern continues, other electronics manufacturers — and all companies in general — will soon follow suit.

Isn’t interesting how sometimes the ducks do line up.