The New York Times ran a small story last week titled “What Do All These Phone Apps Do? Mostly Marketing”  It makes the point that there are a number of iPhone apps whose primary purpose is advertising and/or brand building with the actual function of the application being almost secondary.

A good example cited is a ‘spirit level’ application from Stanley Works.

While I don’t expect my local contractor to whip out his iPhone to make sure that the wall he is building is nice and level. It does a nice job of getting the Stanley name out there and build brand reinforcement as an innovative tool company. There are 400,000 downloads claimed for this application, which seems quite high (my guesstimate is that there are about 10 million at&t  iPhone customers in the US) – which points to an amazing retention rate for an advertisement. No wonder, nearly every business is clamoring to get on the iPhone app bandwagon.

From what I have been able to tell, the same phenomenon is not as pronounced with Android, Windows Mobile, or Palm phones.

Just came across two  other posts – from the attention digital blog a spreadsheet of ‘branded apps’ – it has been populated with iPhone apps (over 200)  so far but there are tabs for Android, Blackberry and Palm. The second is a piece of analysis done by ComScore on the % of US Internet users who click on internet ads. Contrasting the 2007 and 2009 figures for all US internet users

It appears that the percentage of the internet user population that is ‘clicking’ through on Ads is declining significantly. 84% are not reached by the ad at all. As the mobile internet becomes more prevalent, maybe the  dominant advertising model will become ‘sponsored apps’ and not click through advertising.

Finally got around to reading the WIRED September issue. In an article titled “Betting on the Store” Steven Levy makes the argument that the iPhone’s success is primarily due to their immense application portfolio (according to the latest Apple TV ads 75,000 or more)

While I would be the first to agree that the applications are impressive (same goes of course for applications on the PRE, Android, Windows Mobile and Symbian phones) but I think the days of the quantity of applications being the key success factor are about to disappear. There are just too many of them and managing your personal application catalog is becoming onerous at best.

Now in the spirit of full disclosure, I have an Android G1 phone not an iPhone. But I think the same arguments apply – there are  just so many applications (15,000 plus for the G1) and there are very few applications that are inherently exclusive to a platform – for example the Hey Where Are You application (iPhone exclusive) provides the same functionality as Google’s Latitude which is multi-platform). Plus looking across the mass of applications, there are a select group that get used regularly (e-mail), some occasionally  (travel sites), some as needed (a dice throwing app anyone?). I would contend, that all platforms are well served by their application catalogs for regular use and even occasional use applications.

The implication is that Apple’s Application Catalog is the de facto ‘walled garden” and as such every mobile platform needs to have thousand and thousands of apps to succeed is just plain wrong.

There are lots of reasons for the iPhone’s success, the App Store is but a small part of it. 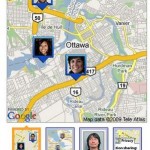 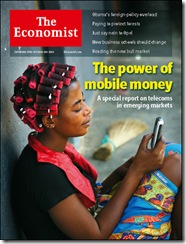 While the headline is a bit misleading, the 14 page report covers much more ground than just ‘mobile money’ The Economist makes a very strong case that the balance of power and innovation has shifted form the developed world to the developing world.  I would very much recommend reading the article from start to finish but in the mean time these are the key points I gleaned from the article.

First and foremost, Why are mobile phones so important and impactful in the developing world? As the Economist states

… being able to make and receive phone calls is so important to people that even the very poor are prepared to pay for it. In places with bad roads, unreliable postal services, few trains and parlous landlines, mobile phones can substitute for travel, allow quicker and easier access to information on prices, enable traders to reach wider markets, boost entrepreneurship and generally make it easier to do business. A study by the World Resources Institute found that as developing-world incomes rise, household spending on mobile phones grows faster than spending on energy, water or indeed anything else.