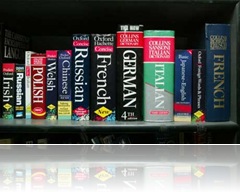 and sidebar on Google’s efforts to improve language translation and some examples pitting machine translation versus a human translator (the gold standard). The participants were Google Translate, Yahoo Babel Fish via Systran and Microsoft Bing Translator. Google seems to have the others beat by a large margin and is about 80 to 90 % of a human translator.

This made me think of my time when I was on assignment for a US company in Italy and ended up having the de facto responsibility of helping my Italian colleagues with their English. In particular, I remember my good friend Elena asking me in exasperation one day “What means this? By the skin of our teeth?” (see the second item on Yahoo Answers for a comprehensive answer).

So in the spirit of checking out Google Translate, I decided to plug in the above phrase and also use Jonathan Feinberg’s babelizer utility. The translation English to Italian to English works quite well.

However when we get English to Japanese to English it is a little more problematic for the babelizer although a bit more amusing.

The moral of the story is machine translation is getting better and better but isn’t quite there yet and there may well be unintentional consequences for the unwary.

Last Thursday in the New York Times, David Pogue had a long article titled The Irksome Telephone Company. In it he pointed out that the US public would be better served by their elected officials if they did not spend so much effort on handset exclusivity (or why does AT&T have exclusive rights to the iPhone?) but concentrated on those areas where the US consumer was being short changed. He identified five areas and I have added one of my own for good measure.

All these issues seem to have a common thread, that while typically there are workarounds, you have to be quite cell-phone-savvy to work them out. They punish the occasional user, the very ones you would expect the cell phone companies to be cultivating to grow their business.

Collectively, these give rise to the awful brand image of most mobile operators when it comes to their customers, which is why I guess they all sell on the basis of technology and price.

(note) It may be that the subsidy falls victim to the green revolution, the present setup encourages the replacement of phones based purely on timing not on need. We can only hope…. 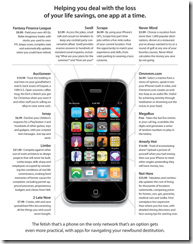 Yesterday’s New York Times had a brilliant parody linking the hype around iPhone applications with the economic recession. Titled, iPanic it has the following header: -

Helping you deal with the loss of your life savings, one app at a time.

The footer is even more biting: -

The fetish that is a phone on the only network that’s an option gets even more practical, with apps for navigating your newfound destitution.

The article is well worth a read, my personal favourite app is